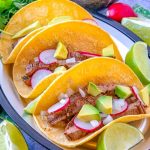 If you do not have a grill, you can use a grill pan on the stovetop instead. You’ll need to preheat your pan and cook the meat on high to sear it, and then lower the heat and cook the meat until the internal temperature registers 130 degrees F. ***Just remember to open a window, there will be a bit of smoke. You’ll also need to cook the meat in batches.