You are here: Home » Blog » Desserts » How to make Cannoli Cream
Jump to Recipe Jump to Video Print Recipe

Making fresh, homemade cannoli cream is easier than you think. You’ll be filling cannoli shells in no time with my How to Make Cannoli Cream tutorial! This popular Italian recipe has been shared over 124,000 times! 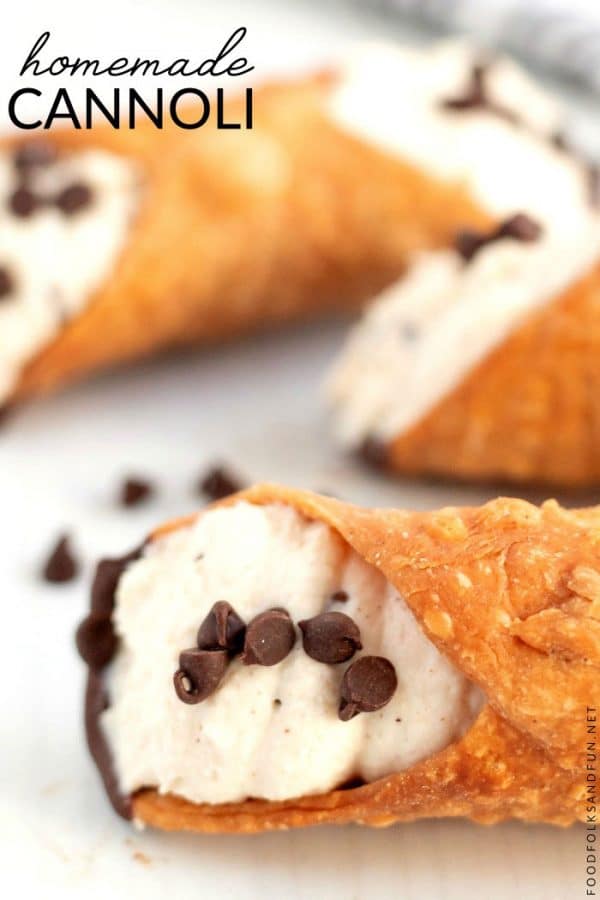 Buckle up, folks because today I’m showing you how to make cannoli cream! Italian pastries are my favorite, and this is my all-time favorite dessert. They are very popular during the Christmas and Easter seasons (especially if you live back east).

I can remember the first time that I had a cannoli. It was at a mom and pop Italian restaurant in my hometown of Southington, Connecticut. It was sweet (but not overly sweet), crunchy, and had the most amazing texture.

I was hooked instantly.

Since I cannot resist these Italian pastries anytime I see them on a restaurant menu.

I love a good cannoli, but sadly they’re hard to find outside of the Northeast. Over the years this Connecticut girl has learned how to make them out of necessity.

My recipe for the cannoli filling is every bit as good as what you can get back east. 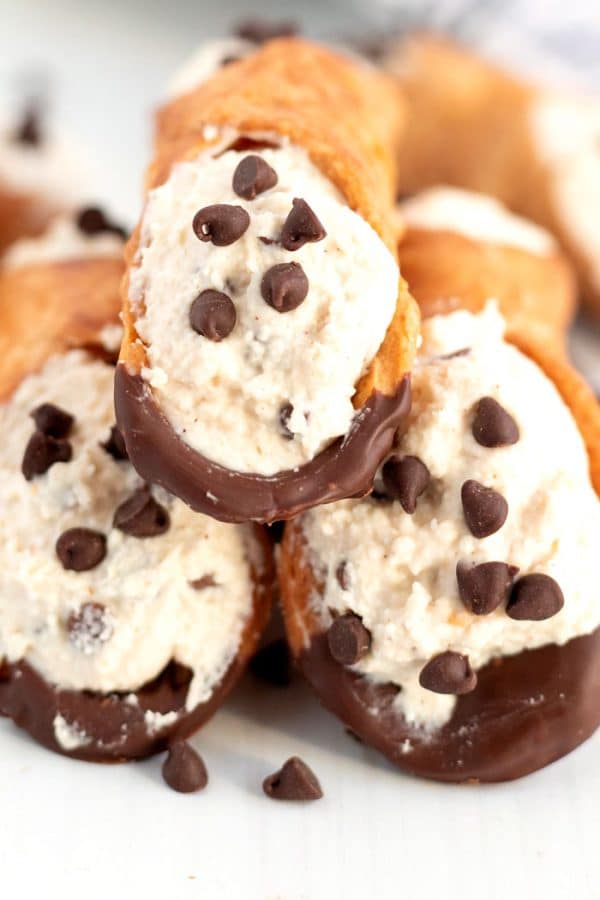 This is by far one of my most popular recipes, and it’s the best cannoli filling I’ve ever had. Don’t believe me? Well, you don’t need to take my word for it, here’s what some of my readers have said about this recipe:

Jenn: These were on my “must make” list and I’m so glad I found this easy peasy recipe for cannoli cream – thank you!

Ruth V.: Jillian, I had success making this cannoli filling several times and it was delicious.

Paula: I am a Cannoli-aholic! I learned to make the cream spot on to your recipe and was taught that the whipping cream addition makes all the difference in the world! Thanks

You can either make them from scratch or buy them.

To make homemade shells you’ll need to buy cannoli forms, make the dough, chill it, roll the dough out, wrap the dough around the forms, and then fry them.

Making a homemade pastry shell takes time, but it is SO worth it! Check out my tutorial for How to Make Cannoli Shells for all of the details. 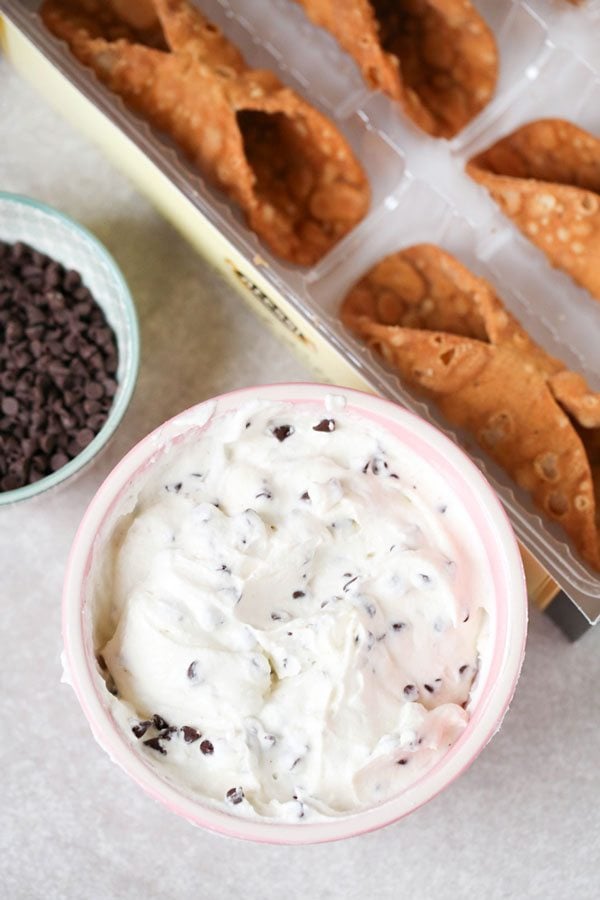 If you decide to buy the shells,  there’s no shame in it, a lot of bakeries and even restaurants do the same thing.

My all-time favorite shells are from World Market. You get a set of 20 mini shells for $2.99! Well worth it in my opinion!

Additionally, if you don’t have a World Market nearby, then Amazon to the rescue! These are my favorite cannoli shells from Amazon.

What is cannoli cream made of?

The cream is made of just 6 basic ingredients:

How do you thicken up the filling?

This is a hard one, and that’s why it’s extremely important to make sure you drain the ricotta before you use it in the filling. BUT, if you filling starts to become runny, you can thicken it up with a little bit of ground almonds that you process in a blender or food processor until they are almost like almond powder. 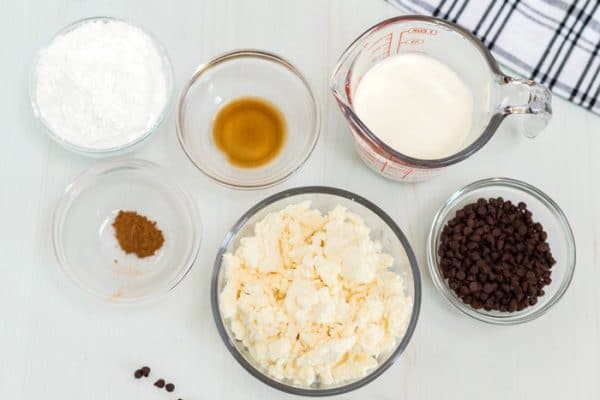 How long does this filling last?

Unfortunately, with fresh ingredients like whipped cream and ricotta cheese, this filling will not last long in the refrigerator. I recommend keeping it in an airtight container in the fridge for no more than 2 days.

I do not recommend freezing the filling, because ricotta cheese and freshly whipped cream do not freeze and defrost well.

Where does Cannoli Come From?

These Italian pastries come from the island of Sicily in the city of Palermo. They’re a staple of Sicilian cuisine as well as Italian-American cuisine.

Is it cannoli or cannolis?

If you love these Italian pastries as I do, then check out these other recipes:

The flavor and recipe variations:

More delicious recipes you have to try: 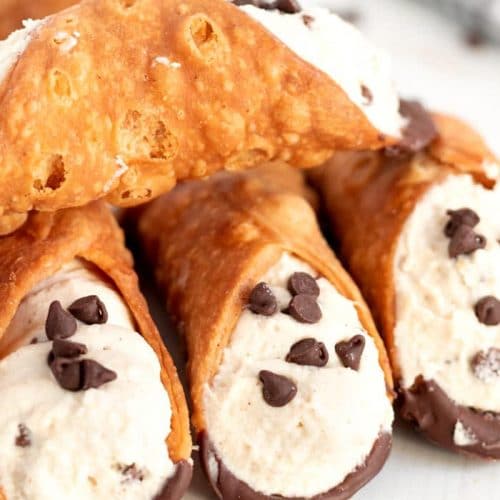 This How to Make Cannoli Cream recipe first appeared on Food Folks and Fun on March 12, 2015. I have since updated the photos and added a recipe video. You can see one of the original photos below. 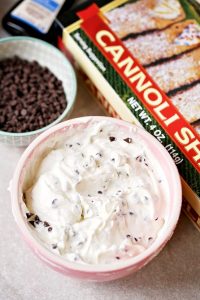 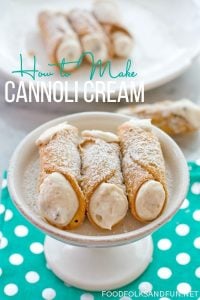 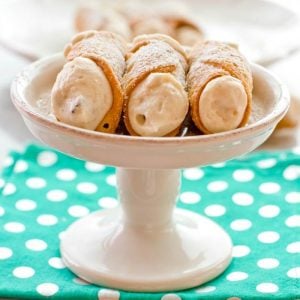 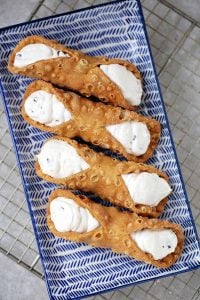 MORE FROM FOOD, FOLKS AND FUN!

I’m Jillian, the creator behind Food Folks and Fun. I have over 30 years of experience cooking for others. There’s nothing I love more than cooking for my family. Food is love, and cooking isn’t just putting a meal on a plate: It’s putting a little part of myself into that meal. Read more...

I’m Jillian, the creator behind Food Folks and Fun. I have over 30 years of experience cooking for others. There’s nothing I love more than cooking for my family. Food is love, and cooking isn’t just putting a meal on a plate: It’s putting a little part of myself into that meal.

More about Jillian and FFF!